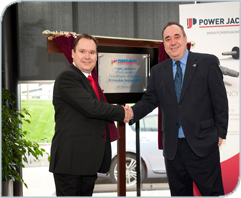 The First Minister today said that Aberdeenshire company Power Jacks’ global success was ‘contributing significantly to the Scottish export industry’ and should lead the way for other firms in this country.

He said: “I am absolutely thrilled to be opening the new Power Jacks headquarters in Ellon - right in the heart of my parliamentary constituency in Aberdeenshire.

“It is fabulous to see a Scottish manufacturing company that has its origins in 1903 and was established in its present form in 1987, continue not just to thrive, but expand, develop and grow. That much is clear when you look around the excellent workshop and offices that the company now calls home.

“The engineering work done by Power Jacks is highly skilled, and serves clients in more than 60 countries across the world, contributing significantly to the Scottish export industry. And as we develop Scotland’s potential in renewable energy and manufacturing over the next decade, Power Jacks’ success should point the way for other firms in this country.”

Power Jacks’ significant expansion — which saw the company honoured with a Queen’s Award for Business Enterprise in 2010 - resulted in the company moving into its next generation business complex at Ellon’s Balmacassie Commercial Park as it marked its 24th year in business.

Managing Director Bruce Bultitude said: “Power Jacks is entering an exciting new era and as a progressive, forward-thinking enterprise, we have consolidated our position for future growth. Our new headquarters will significantly enhance our operations around the world and underpins our commitment to the north-east of Scotland where our engineering heritage dates back to 1903.

“All of Power Jacks’ manufacturing is done on-site in the north-east, ensuring the highest standards of technical expertise and that the latest technologies and innovations are utilised, to the benefit of our customers. We are also investing in the next generation of engineers through our long-established apprenticeship scheme with Banff and Buchan College to ensure our global-leading position for the future of Power Jacks and that of the region.

“It is therefore a particular privilege for the Power Jacks team to have attracted the First Minister to officially open our new headquarters. As a tremendous advocate of Scotland’s manufacturing and export capabilities, who is actively tackling the skills shortage issue, the First Minister is the most fitting figure to launch Power Jacks into its new era.”

The Lord Lieutenant of Aberdeenshire, James Ingleby, was also at the Power Jacks opening ceremony, where he officially presented Mr Bultitude with the company’s Queen’s Award.

Key to Power Jacks’ success is the company’s global marketing capabilities which include a wholly-owned subsidiary sales office in Shanghai, more than 25 international distributors in Europe, Africa, Asia and Australasia, an interactive website and presence at international trade events.

Over the last 20 years, the company has also trained more than 50 apprentices in mechanical and machinery disciplines ranging from assembly to electrical.

It is the only company in the UK and one of only around six in the world which boasts a thread grinding capability for manufacturing planetary roller screws. These products provide a cleaner, quieter and more environmentally-friendly mechanical alternative to hydraulic solutions. One particular application is on Suspension Parameter Measurement Machines and as a result, Power Jacks products have been exported to Toyota, Honda, Mazda, Mitsibushi, & Chrysler.