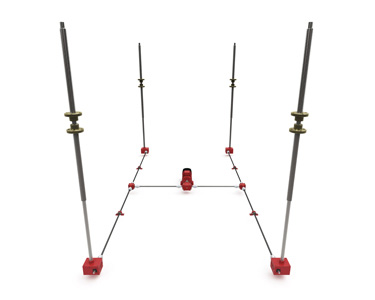 Leading engineering and manufacturing business Power Jacks helped to get the show on the road when a top European car manufacturer wanted to stage a spectacular UK launch for a new model.

Power Jacks engineers had just three weeks to devise and deliver a custom-built system for a stunning showcase that would tour major shopping centres up and down the country.

And the team responsible for meeting the commission proved more than up to the challenge, creating an innovative solution centred upon Power Jacks’ class leading C-Series cubic machine screw jack.

The Power Jacks system was pivotal to a dramatic ‘magic mirror’ effect that slowly unveiled the car to impressed onlookers as far afield as Glasgow and London.

“The car sat inside a ring of pillars of coloured LED light, and was covered by a mirrored box that had a horizontal split,” explains Customer Service and Marketing Director Bruce Hamper. “To make the car appear and disappear, the sides of the box were moved up and down in synchronisation so the top and bottom halves of the car were revealed at the same time.

“We were delighted to have played a part in creating such a fantastic effect. It underlined our capabilities to take on board a challenging and ambitious commission, and come up with the goods.

“It not only highlighted the talent and flair of our people at Power Jacks, but also once again demonstrated both the versatility of our operations and the diversity of potential applications for our products.”

To keep the mirror operation simple yet effective, Power Jacks engineers opted to use a four screw jack system in an H-configuration – the type commonly used to lift a single platform in one direction.

“For this application, however, the design needed to move two platforms in opposite directions, at the same time and rate,” adds Bruce.

A lead nut with corresponding thread ran on each thread form portion of the screw, so each screw in effect had two lead nuts. Therefore the system had eight lead nuts in total (two per screw jack) – four connected to the top mirror section and four to the bottom mirror section.

As the jacking system was operated, the nuts ran in opposing directions so the mirror sections did likewise at the same speed in a mechanically synchronised manner.

By using a mechanically linked system, the whole operation was controlled by one motor which greatly simplified the control system and minimised costs.

The four C-Series cubic machine screw jacks selected for the system were mechanically linked to the electric motor via three bevel gearboxes from the ultra compact Neeter Drive Range-N design.