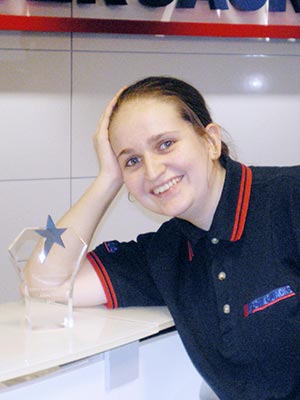 Alison Petrie, 20, from Maud, works with global-leading engineering firm Power Jacks which is supporting her college studies to gain a Modern Apprenticeship in manufacturing and maintenance engineering.

She was presented with the Ian Corney Engineering Award at the college’s Modern Apprenticeship Awards ceremony after impressing the judges with her loyalty to her employer and ambition to help train future apprentices.

Alison’s role within the Ellon-headquartered company sees her working on several global projects. She has recently been involved in working on orders for aluminium smelters, nuclear installations, aircraft maintenance, and oil and gas applications. The former Mintlaw Academy pupil said: “It is a real honour to win the Ian Corney Award and I couldn’t believe it when I heard I was on the shortlist. Since joining Power Jacks in 2012, I’ve been given the opportunity to get involved in a lot of interesting and diverse projects. It’s an exciting job and I’d like to encourage others into the industry.

“The modern apprenticeship scheme has been really worthwhile for me and has meant I have had a lot of support from both Power Jacks and the college. I’d like to thank everyone who has helped me.”

The company joined forces with North East Scotland College two years ago by launching its modern apprenticeship scheme. It is aimed at helping to address the skills shortages in the industry whilst providing a defined development path for individuals looking to follow an engineering career.

At present, Power Jacks has five apprentices with plans to recruit up to three new apprentices each year.

“The modern apprenticeship scheme has been really worthwhile for me and has meant I have had a lot of support from both Power Jacks and the college. I’d like to thank everyone who has helped me.”Alison Petrie Bruce Bultitude, Power Jacks’ managing director, said: “Alison has been a great addition to the team and thoroughly deserves to win the award due to her attitude and the quality of her work. She has worked tremendously well since joining Power Jacks and has a bright future as a mechanical engineer.

“As a company, we are keen to provide opportunities to the engineers of tomorrow and it is encouraging to watch all our apprentices grow into their roles and take the first steps on their career path.”

Paul Sherrington, depute principal North East Scotland, said: “It has always been very clear that one of our main aims is to provide relevant training designed to allow individuals to develop sustainable careers, and the Modern Apprenticeship programme meets that purpose.

“We are the second largest training provider for apprentices in Scotland and we want that to grow. In total we have 460 apprenticeships across Aberdeen and Aberdeenshire. In Fraserburgh alone we have 298 current Modern Apprenticeships with 87 awarded this year.”

The Ian Corney award was set up in memory of the former college student who passed away earlier this year. He attended Banff and Buchan College at an early stage of his career before going on to establish his own business and entering the oil and gas industry.

Over the last 20 years, the company has also trained more than 50 apprentices in mechanical and machinery disciplines ranging from assembly to electrical.

It is the only company in the UK and one of only around six in the world which boasts a thread grinding capability for manufacturing planetary roller screws. These products provide a cleaner, quieter and more environmentally-friendly mechanical alternative to hydraulic solutions. One particular application is on Suspension Parameter Measurement Machines and as a result, Power Jacks products have been exported to Toyota, Honda, Mazda, Mitsibushi, & Chrysler. For more information about Power Jacks, please visit: www.powerjacks.com