How Does A Rotating Screw Jack Work? 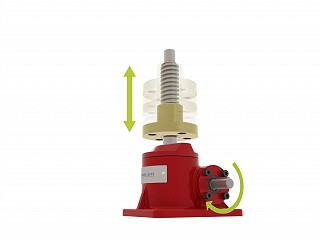 In Brief: When the worm shaft is rotated the lead screw rotates in the body of the screw jack at the same rate as the worm gear. The nut on the lead screw moves in a linear direction along the screw when fixed to a structure that prevents it from rotating with the screw. This design is also available with a “Safety Nut”.

In Detail: When a screw jack unit is operated, the rotation of the worm shaft causes the worm gear to rotate. For rotating screw jacks the lead screw is fixed to the worm gear and they rotate at the same speed. As the worm gear turns, the friction forces on the screw thread act to turn the nut also. The greater the load on the screw jack unit, the greater the tendency of the nut to turn. It is obvious that if the nut turns with the screw, it will not raise the load. Therefore the nut needs to be fixed to a structure to prevent rotation. The restraining torque required for the structure, also known as the “lead screw key torque” can be found in the E-Series Screw Jacks brochure (P77).