How Does A Translating Screw Jack Work? 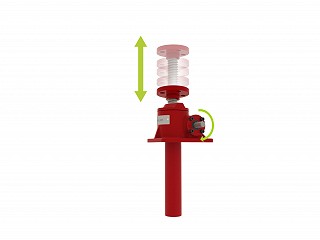 In Brief: The lead screw translates through the body of the screw jack when the lead screw is prevented from rotating with the worm gear. This is typically done by fixing the end of the lead screw to the structure that needs to be moved linearly.

In Detail: When a screw jack unit is operated, the rotation of the worm shaft causes the worm gear to rotate. For translating screw jacks the worm gear is threaded to accommodate the lead screw thread. As the worm gear turns, the friction forces on the screw thread act to turn the screw also. The greater the load on the screw jack unit, the greater the tendency of the screw to turn. It is obvious that if the screw turns with the nut (worm gear), it will not raise the load. In those cases where a single unit is used, and where the load cannot be restrained from turning, it is necessary to screw jack with an anti-rotation mechanism (keyed screw jack). Lead screw key torque (refer to E-Series Screw Jacks brochure (P77)) must be checked as excessively heavy unguided loads could break the Anti-rotation mechanism (key).